Fine diced Garlic&onion in a table spoon of White wine.

Works well with Spaghetti or Penne

The project:  The Italian Federation of Chefs is starting a new project to help people to learn how to cook good healthy food at home.With a monthly challenge  we will ask to all FIC UK Members to create a recipe for people to recreate at home using 3 suggested ingredients.The aim of this project is to involve the Chefs to teach the general public how to cook  to follow an healthy life at home with a professional touch.

Ever wondered what London looks like to the eyes of a homeless man, or an older woman?

Join us for an evening of friendship, food and sharing with the Community of Sant’Egidio, hosted by Tasting Sicily – Enzo’s Kitchen restaurant. You’ll donate to an all-volunteers charity fighting loneliness that every week visits the homeless and every month prepares a dinner for older people. You’ll also have a chance to talk to many of its members, and discuss what it means to be in need in London.

An unmissable fundraising event where you will taste the finest Italian cuisine (straight from Sicily’s traditions) and participate to a raffle and an auction. All whilst donating to charity!

The Community of Sant’Egidio was born in Rome in 1968. It was created by a group of students who decided they wanted to donate some of their time to the most vulnerable, in a personal way. It is now a movement in more than 70 countries of the world.

In London, Sant’Egidio is a friend of the poor: every week its members gather together to make sandwiches which they then distribute in four different areas of London to people in need living in the streets. They have now met many homeless, who remind them of what counts in life, and how true friendship is a real treasure.

Sant’Egidio also organises a monthly event called “Our Cup of Tea” for older people and anyone who is lonely. It is completely free of charge for anyone coming, and is a three-course dinner full of entertainment, singing and sometimes even dancing. Most of all, it is an evening where a new family is created, where everyone feels at home, and where one hardly distinguishes who serves from who is being served.

The Royal Horticultural Halls
is at 10 minutes walking from Victoria station and is simply reachable by the Victoria Line, the Circle line and the District Line.

There will be plenty of opportunities to meet producers and attend extraordinary cooking shows.

Welcome Italia is the event organised by the Italian Chamber of Commerce and Industry for the UK dedicated to lovers of all things Italian and those who wish to discover and explore the best of Italian Food & Beverage. Indulge your senses in a unique experience made of Italian aromas and flavours, in a journey that brings together quality, passion and taste. You will have the chance to meet the producers of the best Italian food, drinks and ingredients, while the most famous Italian chefs in the United Kingdom will demonstrate their ability, recreating delicious recipes during their extraordinary cooking shows.

The MagniFIC- Chef Challenge  has been organized for the first time by the Federazione Italiana Cuochi UK Delegation (FIC UK) for Alitalia.

Today, the FIC UK will create a new challenge dedicated to find the best Chef ready to cook with passion, creativity and technical skill, using specific Italian product from all over Italy.

Sponsors of the event will provide the best Italian products for the 5 days challenge, in the Best Restaurants in London, and  leaving the competing Chefs to use their best skills to create original and tasteful dishes.

Through individual challenges our Contestants will be judged by international experts from various hospitality fields.

At the end of the 5 days of competition, only 1 winner will be crowned and will be the Super MagniFIC- Chef.

If you are a Food Brand, a Chef of a Restaurant and you are interested to join the project please write to us:

THE WINNER OF MAGNIFIC – CHEF WORKSHOP 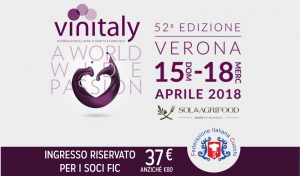 To be accredited, send an email to segreteria@fic.it with your personal details and the FIC card code of 2018.

We remind you that inside the fair you will find the Goloso Restaurant run by the Italian Chefs Federation. In the kitchen the Italian National Chefs who will make excellent dishes paired with the best wines in the world.

Following the successful presentation of our Project about Culinary Medicine on the 9th of December, during the event ‘A Gut Feeling” by Jeane Trend Hill, the Federation Italian of Chefs will be proud to release to the public the 2 recipes created for the “Culinary Medicine project”.

In collaboration with the Italian Medical Clinic DottoreLondon, the recipes have been created by top Chefs following the specific diet for Inflammatory Bowel Disease.

The object of Culinary Medicine is to empower patients to care for themselves safely and happily with food and beverage as a primary care technique under the Doctor’s guidance and learn how to live healthy.

JEANE’S STORY:
I have been living with an inflammatory bowel disease for the best part of five years. I had chronic diarrhoea, pain, bleeding and my weight dropped to 70lbs. Prior to this I had been happy and healthy. Now I was in agony, unable to leave the house without a wheelchair and my marriage ended because of domestic abuse. My life changed forever. For months, I didn’t want to carry on, but after hospital stays and extensive tests, I was stabilised. I regained my strength, no longer needed a wheelchair and moved out of the marital home. I basically had to start my life over. It’s been a challenge, I still have flare ups, but if I waited for a day when I felt well enough, I wouldn’t do anything.

It’s not always easy for people to understand what it’s like to have an IBD and endure domestic violence. By creating an art piece, it helps to show them. It has recently been on display in Nottingham where it was described as ‘very powerful’.

9th December 2017
From 11:00 to 3pm
at
ArtCafeLondon.Art
14 Irving Street Leicester Square
Underneath the L’Ulivo Restaurant

During the event will be presented an Artwork by Jeane

The nest represents her bed, comfort from the pain and chronic fatigue, the pills and drips allow her to thrive. The discarded rings alluding to the break-up of her marriage, A torn business card, my career on hold. Her intestines are inflamed and feel knotted. 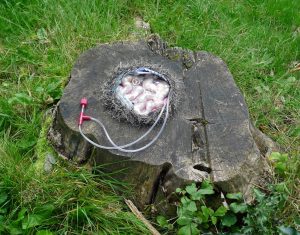 Good Italy Group is pleased to invite the